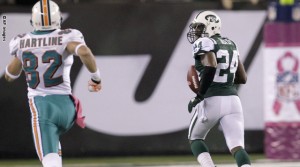 Mark Sanchez ran for one touchdown and threw for another for the Jets (3-3), who also got a defensive touchdown from Darrelle Revis on a 100-yard interception return.

Kevin Harlan and Boomer Esiason called the action on Westwood One.