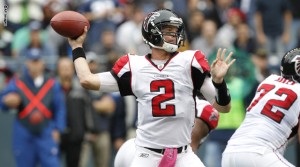 Matt Ryan threw for 291 yards and a touchdown for the Falcons (2-2), who also got two TD runs from Michael Turner. A 61-yard field goal attempt by Steven Hauschka with :13 remaining missed and the Seahawks dropped to 1-3 on the year.

Kevin Kugler and Mark Malone called the action for Westwood One.

(Jackson to Ben Obomanu for an 8-yd TD gets Seattle within two points, 30-28)