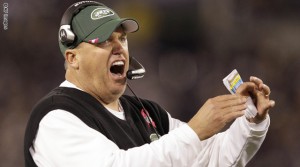 The New York Jets find themselves 2-3 and in the midst of a three-game losing streak as they head into their Monday Night Football meeting against the Miami Dolphins (0-4).

Kevin Harlan, Boomer Esiason and Steve Tasker (sidelines) will have all the action of Jets-Dolphins from MetLife Stadium. Coverage of Monday Night Football begins at 8 PM Eastern with Jim Gray and the pregame show with weekly contributors Tom Brady and Larry Fitzgerald.