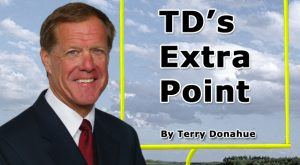 Baton Rouge! Now that’s a great place to see a football game. I could not believe the excitement around the game against Auburn and the pending match-up with Alabama. This was College Football at its best and LSU didn’t disappoint. From the opening drive ’til the end of the game, LSU looked like a top-flight team in every area.

If you hadn’t been told beforehand, you would’ve never known that THREE TOP PLAYERS had been suspended for the game. The replacements went in and looked like they should be the starters. They would all have a strong case before an arbitration board that they had been wrongly evaluated by the coaching staff. How can those three guys be BACK-UPS? What were their names anyway? Anybody know or care? Just plug ’em in and win.

By the way, the barbecue was the equal of Texas!! What a place: BATON ROGUE!

Next week I visit Kansas State at home against Oklahoma. The Little Apple. NOBODY – and I mean NOBODY – has done a better job of recruiting and coaching than Bill Snyder. More on that Saturday. Tune in!

Terry Donahue is a member of the College Football Hall of Fame and an analyst for Westwood One’s coverage of NCAA Football. John Tautges and Terry will have all the action of the Kansas State-Oklahoma game beginning at 3PM Eastern Saturday.