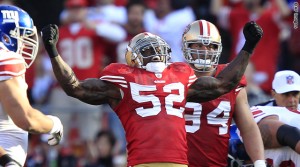 The 49ers have been the surprise team in the NFL this season – racing to a 9-1 record and a huge lead in the NFC West. In fact, a win Thanksgiving night against Baltimore coupled with a Seattle loss on Sunday would clinch the division – in Week 12!