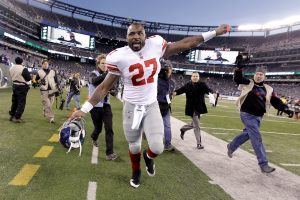 EAST RUTHERFORD, NJ (12/24/11) – The New York Giants will play the Dallas Cowboys next Sunday with the NFC East title on the line after beating the New York Jets 29-14 on Christmas Eve.

Ahmad Bradshaw ran for two touchdowns and Eli Manning connected with Victor Cruz on a 99-yard score as the Giants (8-7) put a major dent in the Jets’ playoff hopes.

Howard David and Tony Boselli called the action on Westwood One Sports.

(Eli Manning hits Victor Cruz, who outruns the defense for a 99-yd TD and a 10-7 Giants lead)

(Bradshaw seals the win with a 19-yd TD run)