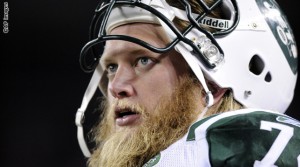 If you’re looking for a go-to-guy on Christmas Eve, you might lean towards selecting a man with a bushy beard.

For the New York Jets, that guy is All-Pro center Nick Mangold. The three-time Pro Bowler leads an offensive line that will need to protect Mark Sanchez on Saturday as his team hosts the “visiting” New York Giants at MetLife Stadium.

Mangold spoke with our Scott Graham ahead of the Battle for New York – which will have a big impact on the playoff races in both the AFC and NFC.

Howard David and Tony Boselli will have all the action from East Rutherford as the Jets take on the Giants. Coverage begins Saturday at 12:30 PM Eastern.