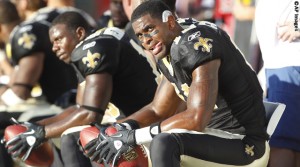 If you’ve only seen the Saints play in primetime this year, it’s probably hard to believe they’ve suffered three losses. From a 62-7 shellacking of the Colts to last Monday night’s pasting of the Giants, the Saints have shined brightest in front of a national audience. Even in a Week 1 loss to Green Bay, the Saints had a shot right down to the final play.

Even with all those impressive displays, additional defeats at the hands of Tampa Bay and St. Louis have left New Orleans just a game ahead of the Falcons in the NFC South, making Sunday night’s meeting with the Detroit Lions very important.

Wide receiver Marques Colston spoke with Westwood One NFL studio host Scott Graham about the showdown at the Superdome.

Coverage of the Saints and the Lions on Sunday Night Football begins at 7:30 PM Eastern with NFL Sunday, where Scott Graham brings you all the scores and highlights from Sunday’s NFL action. Pregame from New Orleans with Dave Sims, James Lofton and Kevin Kiley (sidelines) will begin at 8 Eastern.