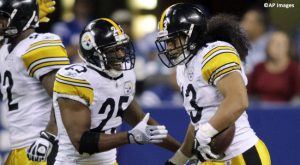 The Pittsburgh Steelers head into a Thursday Night Football meeting with division rivals Cleveland on the back of a three-game winning streak — including Sunday’s epic beatdown of the Cincinnati Bengals.

Pittsburgh is also looking to notch its 10th win of the season and keep the pressure on Baltimore to win on Sunday in order to keep pace in the tight AFC North race.

Coverage of Steelers-Browns from Heinz Field will begin at 8 Eastern on Westwood One Sports. Ian Eagle, Boomer Esiason and Laura Okmin (sidelines) will have all the action from Pittsburgh.