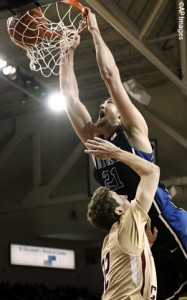 After a pair of thrilling come-from-behind wins against North Carolina and North Carolina State, Coach K’s team pulled away early and blew out Boston College 75-50 on Sunday night.

Duke is now tied with North Carolina and Florida State atop the ACC standings. The Blue Devils face the Seminoles Thursday in Tallahassee.

Dave Ryan and Pete Gillen called the action on the Westwood One Radio Network.

(Miles Plumlee ends the first half with a follow-up dunk)

(Rivers’ basket puts Duke up big early in the 2nd half)

(Seth Curry gets fouled while hitting a three)