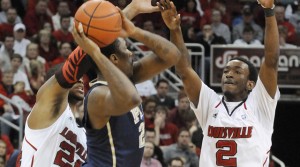 LOUISVILLE, KY – The Louisville Cardinals battled back in the second half against Big East rivals Pittsburgh on Sunday to notch a close 57-54 win.

The Panthers (15-14, 4-12) dominated early, with Louisville held scoreless for nearly five minutes at the start of a first half that was plagued by turnovers (the two teams combined for more turnovers than field goals made).

Louisville (22-7, 10-6) had a one-point lead at halftime, but got going early in the second half thanks to strong contributions from Russ Smith and Kyle Kuric. Smith had 18 points off the bench, while Kuric added 17.

Kevin Kugler and Steve Lappas called the action on the Westwood One Radio Network.

(J.J. Moore’s triple gets Pitt within 3 in the first half)

(Another Kuric three puts Louisville up 53-48)

(Pittsburgh has a shot to tie the game at the buzzer)