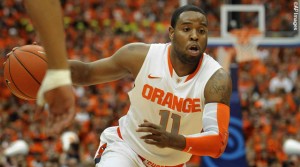 SYRACUSE, NY – Syracuse finished the game on a 22-6 run to pull away from a battling Connecticut squad, as the Orange defeated the Huskies 85-67 on Saturday afternoon.

Scott Graham and Tom Brennan called the action on the Westwood One Radio Network.