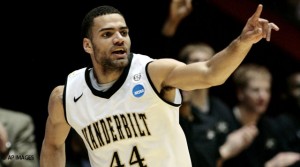 ALBUQUERQUE, NM – Harvard’s first appearance in the NCAA Tournament since 1946 was a brief one.

The 12th-seeded Crimson didn’t have enough to dig out of a big hole, as 5th-seeded Vanderbilt earned a 79-70 victory from Albuquerque.

Laurent Rivard scored a game-high 20 points for Harvard, but the Crimson didn’t have an answer for Vandy’s John Jenkins, who poured in a game-higih 27 points.

Dave Sims and Michael Cage called the action on the Westwood One Radio Network.

(Webster drills a three for the Crimson to break the tie, 20-17)

(Taylor throws it down with authority, as Vanderbilt pulls away, 62-44)