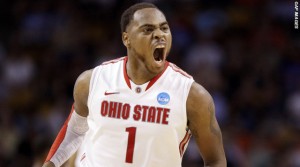 BOSTON, MA – Ohio State led early, watched Cincinnati rally, then finished off their homestate rivals with a late flurry to advance to the Elite Eight with a 81-66 on Thursday night.

Kevin Kugler and Pete Gillen called the action on the Westwood One Radio Network.

(Jaquon Parker ties the game at 41 for Cincinnati)