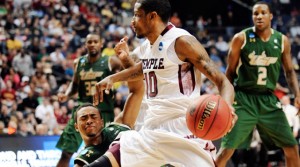 NASHVILLE, TN – Both teams started out cold but Victor Rudd Jr. and Anthony Collins warmed up and both scored 17 points as the 12th-seeded South Florida Bulls upset the fifth-seeded Temple Owls 58-44.

USF moves on to face Ohio University on Sunday.

Brad Sham and Pete Gillen had the call on the Westwood One Radio Network.