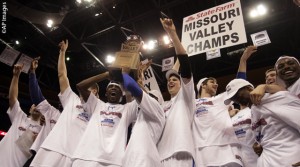 ST. LOUIS – Doug McDermott scored 33 points on 12 of 18 shooting to lead Creighton past Illinois State 83-79 in overtime in the Missouri Valley championship game.

Wayne Larrivee and Kyle Macy called the action on the Westwood One Radio Network.

(Doug McDermott ties it at 51)

(Creighton misses and the game heads to overtime)