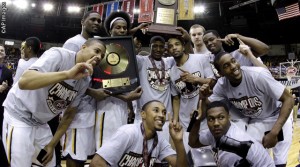 John Tautges and Tom Brennan called the action on the Westwood One Radio Network.

(Robert Covington puts Tennessee State ahead 5 with a three)