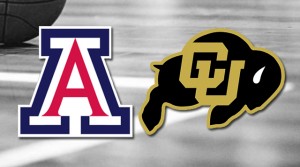 LOS ANGELES, CA – Call it the start of a new rivalry? It’ll be Arizona and Pac-12 newbie Colorado playing for an automatic bid to the NCAA Tournament after the Wildcats and the Buffaloes triumphed in Friday night’s semifinal games.

Kyle Fogg had 22 points to lead Arizona past Oregon State 72-61. Colorado used a balanced attack to down Cal 70-59, with both Andre Roberson and Carlon Brown pouring in 17.

Kevin Kugler and Bill Frieder called the action on the Westwood One Radio Network.

(Jorge Gutierrez puts Cal up 1 with a basket)

(Brown provides the exclamation point as Colorado moves on)