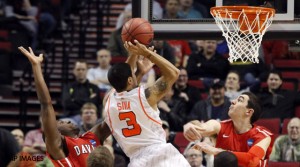 The Big East Tournament champions will face either (5) New Mexico or (12) Long Beach State in the 3rd round.

Kevin Calabro and Bill Frieder called the action on the Westwood One Radio Network.

(Cohen with a dunk to pull Davidson within two)