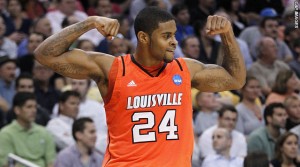 Louisville advances to play the winner of the Marquette-Florida game in the West Regional final on Saturyday.

Dave Sims and Bill Frieder called the action on the Westwood One Radio Network.

(Peyton Siva’s dunk is followed by a steal and foul)

(Kuric’s three wraps it up for the Cardinals)