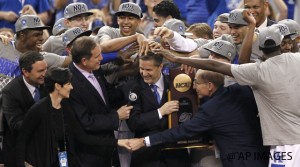 NEW ORLEANS, LA – Led by kids who were playing high school basketball just one year ago, the Kentucky Wildcats are now the undisputed rulers of the college game.

Despite a sluggish second half, Kentucky was able to claim the school’s first national championship since 1998, with a 67-59 victory over Kansas.  The Wildcats led by as many as 18 points in the first half and owned a 41-27 halftime lead, but a resilient Jayhawks squad would never allow Kentucky to put the game out of reach, and cut the deficit to as few as 5 points late in regulation.

But a Kentucky squad which was solid at the free throw line all season did not wilt under the pressure of the game’s grandest stage, converting their free throws down the stretch to keep Kansas at arm’s length, and complete a dream season for one of the sport’s elite programs.

UK head coach John Calipari finally claimed his first national championship, after leading his third different school to his fourth career Final Four.  It was also a measure of personal revenge for Calipari, who avenged his 2008 title game loss to Kansas head coach Bill Self, when Calipari was the head coach at Memphis.  In that game, the Tigers let a 9-point lead slip through their fingers in the final minutes of regulation, as the Jayhawks eventually won in overtime.  But just when it seemed history may be repeating itself for a Calipari squad, the Kentucky youngsters maintained their poise down the stretch, and denied Kansas their second championship in five years.

Kentucky sophomore Doron Lamb led all scorers with 22 points, while AP Player of the Year Anthony Davis had one of the more unorthodox productive games in tournament history.  The freshman was just a dismal 1-for-10 from the field and scored only 6 points, but recorded game-highs of 5 assists, 3 steals, and 6 blocked shots, along with 16 rebounds.  Fellow freshman Michael Kidd-Gilchrist and Marquis Teague combined for 25 points.

Thomas Robinson had a monster game for Kansas, with 18 points and 17 rebounds, while Tyshawn Taylor added a team-high 19 points.  Elijah Johnson added 13 for the Jayhawks, who continued their trend of coming back from double-digit deficits, but didn’t have enough in the tank to overcome a Kentucky team considered one of the most talented squads in recent memory.

Kevin Kugler, Bill Raftery and John Thompson called the action on the Westwood One Radio Network.

(Kidd-Gilchrist and Lamb strike quickly to put UK on top)

(Kentucky continues to pour it on, as the lead balloons to 15)

(Taylor gives Kansas a bit of momentum heading into the half)

(Kansas implodes down the stretch with key consecutive turnovers)

(It’s official: the Kentucky Wildcats are the national champions!)