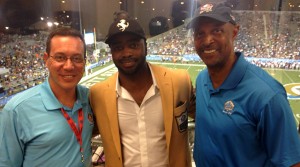 CANTON, OH – The New Orleans Saints downed the Arizona Cardinals 17-10 in the annual Hall of Fame Game on Sunday night, but the real stars of the evening were the six new members of the Pro Football Hall of Fame.

Click below to listen to Scott Graham and James Lofton’s interviews with the new inductees.