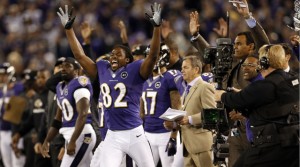 BALTIMORE — The Baltimore Ravens rallied for 10 points late in the fourth quarter to down New England 31-30 on Justin Tucker’s 27-yard field goal as time expired.

The Patriots led 30-21 with less than five minutes to play when Joe Flacco connected with Torrey Smith for the wide receiver’s second touchdown of the night. Smith had six catches for 127 yards playing in the game less than 24 hours after his younger brother died in a motorcycle accident.

Kevin Kugler and James Lofton called the action on Westwood One Sports.