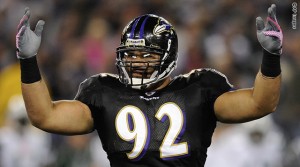 AFC North foes will do battle tonight when the Baltimore Ravens host the Cleveland Browns on Thursday Night Football.

The Ravens are 2-1 and coming off a one-point win over the defending AFC champion New England Patriots on Sunday Night Football.

Playing under the lights is nothing new for this Ravens team – tonight’s game will mark its third primetime contest already this season, including an opening-week drubbing of Cincinnati.

Ahead of tonight’s game, our Scott Graham had a chance to speak with Ravens’ defensive stalwart Haloti Ngata.

Coverage of Ravens-Browns begins tonight at 8 PM Eastern on Westwood One Sports. Ian Eagle, Boomer Esiason and Laura Okmin will have all the action live from M&T Bank Stadium.