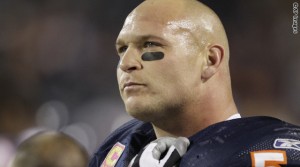 Brian Urlacher and the Chicago Bears are 4-1 and have a chance on Monday Night Football to stay a half-game ahead of the Minnesota Vikings in the NFC North.

But first they’ll have to get through another divisional rival in the Detroit Lions.

Ahead of game, the Bears’ eight-time Pro Bowl linebacker spoke with our Jim Gray about the defense’s great play, his own season so far and his team’s oft-criticized quarterback, Jay Cutler.

Kevin Harlan and Boomer Esiason will have complete coverage from Chicago as the Bears take on the Detroit Lions tonight. Air time is 8 PM Eastern on Westwood One Sports.