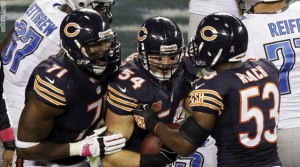 CHICAGO – Relentless pressure for the Bears’ defense kept Detroit off the board through most of Monday night’s game as Chicago downed the Lions 13-7.

The Bears forced four Detroit turnovers as time after time the Lions got close to scoring but came up empty. A late Matthew Stafford TD pass to Ryan Broyles got Detroit within a score, but after the Bears recovered the ensuing onside kick, they were able to run out the clock.

Chicago improved to 5-1 on the season. Detroit dropped to 2-4.

Kevin Harlan and Boomer Esiason called the action on Westwood One Sports.