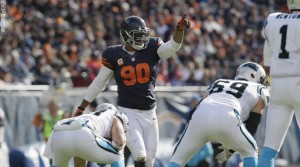 Chicago will be rocking tonight when the Bears host the Houston Texans for Sunday Night Football.

Both teams enter the game with identical 7-1 records and both will be hoping to solidify their place among the NFL’s elite with a victory.

Ahead of the game, our Scott Graham had a chance to speak with the Bears’ All-Pro defensive end Julius Peppers.

Coverage of Bears-Texans from Soldier Field begins with Scott Graham on NFL Sunday at 7:30 PM Eastern. Dave Sims, James Lofton and sideline reporter Hub Arkush will have complete coverage of the game beginning at 8 Eastern.