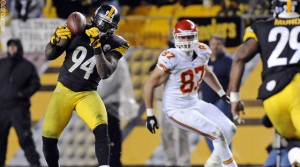 The win, which improved Pittsburgh to 6-3 on the season, came at a great cost for the Steelers, who lost quarterback Ben Roethlisberger to an apparent shoulder injury.

The Chiefs, who fell to 1-8 on the season, tied the game on the final play of regulation thanks to Ryan Succop’s 46-yard field goal.

Kevin Harlan and Boomer Esiason called the action on Westwood One Sports.

(Lawrence Timmons’ interception sets the Steelers up for the win)