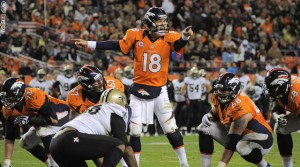 With two games to go in the regular season, the Denver Broncos are actually in a similar circumstance as last year – except so much has changed since the Broncos backed into an AFC West crown in 2011 and then shocked the Pittsburgh Steelers with an overtime win in the Wild Card round.

With two wins in its final two games, Denver will avoid the Wild Card round completely this year. And of course, there’s the tiny matter of Peyton Manning having a comeback season that makes Tim Tebow’s playoff heroics seem like a distant memory.

But Peyton isn’t the only former Colt to have joined the Broncos in 2012. Tight end Jacob Tamme also moved west in the off season and he spoke to our Mark Malone about Manning’s big year and much more.

Sam Rosen and Mark Malone will have all the action Sunday afternoon from Sports Authority Field as the Broncos take on the Cleveland Browns and try to move one step closer to a first-round bye. Our Westwood One Sports broadcast begins at 3:30 PM Eastern.