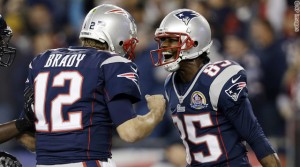 The New England Patriots are big favorites heading into Sunday’s Divisional Round matchup with the Houston Texans, thanks in large part to the way the Pats pasted the Texans in primetime back in December.

With seven catches for 89 yards and a touchdown, Brandon Lloyd played a big part in that 42-14 outcome, which featured four Tom Brady TD passes in all.

Ahead of this weekend’s rematch, our Mark Malone had a chance to speak with the Patriot wide receiver.

Texans-Patriots is Game Two of our Sunday Divisional Doubleheader. The action kicks off at 12:30 PM Eastern with Seahawks-Falcons from Atlanta, which will be immediately followed by our coverage from Foxboro. Ian Eagle, Trent Green and sideline reporter Lewis Johnson will bring you all the action.