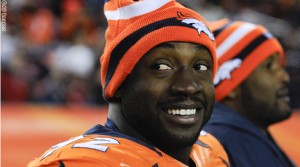 It’s safe to say you might’ve heard about Peyton Manning’s incredibly successful comeback from neck surgeries this year. The brand new Denver Bronco dominated the headlines throughout his team’s march to an AFC West title.

But it’s also safe to say Denver wouldn’t be the top seed in the AFC and heading into Saturday’s game against Baltimore as a favorite to represent the conference in Super Bowl XLVII if it wasn’t for the impressive play on the other side of the ball.

Ahead of the game, our Scott Graham had a chance to talk with Broncos’ defensive lineman Elvis Dumervil, who starred for a team that ended the regular season ranked 2nd in the NFL in total defense.

The Broncos begin their quest for a Super Bowl title today against the Ravens at Sports Authority Field. Our coverage begins at 4 PM Eastern with Kevin Kugler, Mark Malone and Scott Kaplan bringing you all the action.