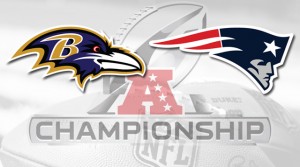 It’s Conference Championship Weekend in the NFL and that means it’s time to figure out who will represent the AFC and the NFC in Super Bowl XLVII in New Orleans on February 3rd.

Ahead of the AFC Championship Game, we cracked open the Westwood One Sports vault to bring you classic highlights from the Baltimore Ravens and New England Patriots, as narrated by our very own Scott Graham.

Westwood One’s coverage of the NFC Championship Game will begin on Sunday afternoon at 2 PM Eastern. Dave Sims, James Lofton and sideline reporter Tony Boselli will have all the action live from the Georgia Dome.