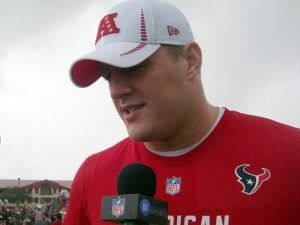 J.J. Watt’s first NFL season featured a huge playoff highlight in the Texans’ first-ever postseason win as a franchise. Then he followed it up with one of the best seasons ever seen from a defensive lineman, with sacks and passes knocked down all over the place. And, of course, that means Watt will be making his first Pro Bowl appearance this year.

Ahead of the game, our Laura Okmin talked with Houston’s star defender.

Westwood One’s coverage of the 2013 Pro Bowl from Hawaii begins tonight at 7 PM Eastern. Dave Sims, Tony Boselli and Laura Okmin will have all the action from Aloha Stadium.