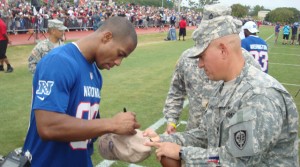 Victor Cruz’s season won’t end in quite the same spectacular way as last year, when the Giants triumphed in Super Bowl XLVI. But this year did feature a different special accomplishment as the Giants’ star wide receiver was selected to the Pro Bowl.

At practice on Thursday, our Laura Okmin had a chance to ask Cruz about his season and if he has a special Hawaiian-style salsa dance planned for Sunday.

Westwood One’s coverage of the 2013 Pro Bowl from Hawaii will begin Sunday at 7 PM Eastern. Dave Sims, Tony Boselli and Laura Okmin will have all the action.