Can you believe we’re less than a month away from Super Bowl XLVII? It’s time to take a look backwards before we secure our reservations for New Orleans and some good Cajun cooking.

Way back in September I predicted that the Green Bay Packers would face off against the Baltimore Ravens on February 3rd. With 24 teams already gone, I’m feeling pretty proud about that prediction seeing as how both my picks are still alive. Steelers fans and Bears fans, you feel me? Maybe it didn’t work out this season, but as Reverend Jesse Jackson would say, “Keep hope alive.” I actually met Reverend Jackson pregame at last year’s Super Bowl as I am always on the look out for celebrity sightings, but I digress…

So, the Packers are still alive despite losing every running back that’s ever worn the green and gold. Okay, a slight exaggeration on my part, but to lose Cedric Benson in Week 5, have second-stringer James Starks miss 10 games and then have his back-up, Alex Green, miss the last three contests is certainly a lot to handle. So what did the Pack do? Just sign Ryan Grant off the street for the last month and add DuJuan Harris off the practice squad. Tip your hat to running backs coach Alex Van Pelt. Let’s not get started on an offensive line that gave up a league-high 51 regular-season sacks. The plan was to improve the defense and despite what Adrian Peterson did in three games, with just north of 500 yards rushing, the Green Bay defense did improve. Really. In 2011, when the Packers went 15-1 in the regular season, the defense gave up 39 touchdowns and recorded 29 sacks. This year? 36 TDs allowed and a total of 47 sacks. 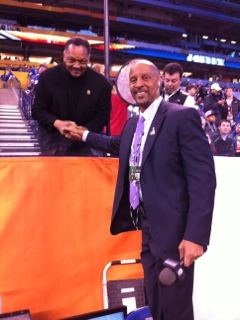 Now, as for my AFC pick… Part Saturday Night Fever and part “Chucky,” Ray Lewis’ squirrel dance is alive and kickin’. The Ravens survived the regular season with “Hey diddle diddle, Ray Rice up the middle” — including on 4th and 29 against the San Diego Chargers.  They canned offense coordinat0or Cam Cameron on December 10th, and then somehow survived losing two of the next three games and four of five to close the regular season. But they won when it counted last week, thanks in large part to the buzz created by the return of their spiritual leader for one final M&T Bank dance-off. But to make the BIG Dance in New Orleans, it’s going to be that other Ray that’s key. Rice picked up 1,143 yards on the year and averaged 4.4 a pop. Combine that with rookie runner Bernard Pierce’s 532 yards and 4.9 per carry and I give the Ravens a solid chance.

Baltimore is no stranger to the spotlight, having won Super Bowl XXXV, but trust me, that is a lot of Roman numerals ago. The defense is no longer the strength of the team, but it is still a strength. The corners have played well even after the loss in October of cornerback Lardarius Webb, who was emerging as a Pro Bowl-level player.

Now, I’m not saying all the Cheeseheads and crab cake lovers should book reservations for the Big Easy just yet. There are six other teams trying to kick it up a notch and earn a trip to chef Emeril’s hometown. Here’s the key ingredient for each to be a part of a Super Bowl gumbo:

Denver: Demaryius Thomas and Eric Decker — too much spice to handle!

New England: The young defense has to sprinkle on just enough seasoning to complement Tom Brady and the offense.

Seattle: Skittles might not work in the stew, but Marshawn Lynch would argue they’d count as dessert.

Houston: With that bow, Arian Foster would be the perfect maître d’.

49ers: They say dance with the one who brought you. So is that Kaepernick or Smith? Or is it both?

Whoever manages to join me, I’ve got my heart set on some good eatin’ in just a few short weeks. Even made my dinner reservation for my anniversary, which falls during Super Bowl week, well in advance. No one wants to be deprived of their well-deserved etouffee, jambalaya, gumbo and bread pudding — including the eight teams that will take to the field this weekend in the Divisional Playoffs.

James Lofton is the analyst for Westwood One’s coverage of Sunday Night Football. This week, Dave Sims and James will be in Atlanta to watch as the Falcons host the Seattle Seahawks. Coverage begins Sunday at 12:30 PM Eastern.