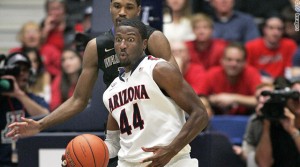 TUCSON, AZ — Arizona rebounded from a slow start before blowing away Washington 70-52 in a Pac-12 contest on Wednesday evening.

The Wildcats managed just eight points in the game’s first 11-plus minutes before rallying to take a 33-25 lead into the halftime break.

It was all Arizona after that, as a 19-5 run to start the second half gave the ‘Cats an insurmountable lead.

John Tautges and Bill Frieder called the action on Westwood One Sports.

(Gabe York hits from three and the rout is on)