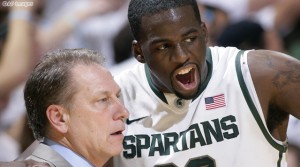 AUBURN HILLS, MI – Tom Izzo and Michigan State got off to a mixed start this year, as the team learned to play without star and leader Draymond Green, who plies his trade in the NBA these days.

After early season losses to UCONN and Miami, Izzo righted the ship and the Spartans finished 3rd in the Big Ten and have been ranked in the top ten since early February.

Now they will open the second round of the NCAA Tournament on Thursday when they face 14th-seeded Valparaiso, and they won’t have to go far to do it.

The Palace of Auburn Hills is just 75 miles or so east of the MSU campus, so it should be packed with Spartans fans in green and white when the ball goes up in the air shortly after 12:15 PM Eastern.

Ahead of the game, Tom McCarthy and Kelly Tripucka caught up with Coach Izzo.

(Listen to Tom Izzo’s interview with Tom and Kelly)