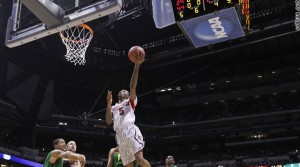 INDIANAPOLIS, IN – Louisville ran out from the gate and never looked back to defeat Oregon 77-69 and advance to the Elite Eight Friday night in Lucas Oil Stadium. The Cardinals led by as much as 18 at one point in the second half, and despite a late Duck run that cut the lead to six, closed out the game to face the winner of Michigan State-Duke on Sunday.

Russ Smith paced Louisville with 31 points while Gorgui Dieng added ten of his own alongside nine rebounds. E.J. Singler scored 15 to lead the Ducks, who fell despite having four of the starting five score double-digits.

Kevin Kugler and Pete Gillen called the action on Westwood One Sports.

(Wayne Blackshear three to close out the half)

(Final call as Louisville advances to the Elite Eight)