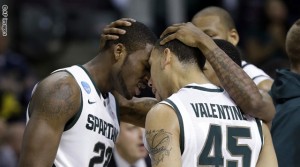 AUBURN HILLS, MI – Playing in their home state of Michigan, the Michigan State Spartans had no trouble breezing past Valparaiso, earning a 65-54 victory which wasn’t nearly as close as the score indicated.

MSU led by as many as 27 points in the second half. Derrick Nix had a monster game against the undersized Crusaders, finishing with game-highs of 23 points and 15 rebounds.

Tom McCarthy and Kelly Tripucka called the action on Westwood One Sports.

(Harris with the lay-in as the lead grows to 27)