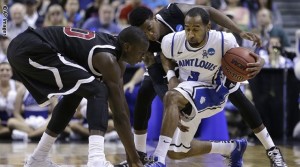 SAN JOSE, CA – St. Louis barely broke a sweat in a 64-44 romp over New Mexico State on Thursday afternoon.  The Billikens led by 13 at the half, and never looked back.

Dwayne Evans led St. Louis with a game-high 24 points on 11-for-16 shooting. Bandja Sy was the lone New Mexico State player in double-figures, scoring 17 points off the bench.

Ted Robinson and Bill Frieder called the action on Westwood One Sports.

(Ellis drains a three to close out a solid first half for St. Louis)