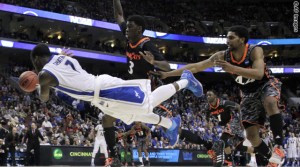 PHILADELPHIA, PA – Defense wins championships.  Or so the saying goes… But on  Friday, the seventh-seeded Creighton Bluejays demonstrated that sometimes good offense can trump good defense, as they defeated the tenth-seeded Cincinnati Bearcats 67-63 in a Midwest Regional Second Round contest.

Not surprisingly, the Bluejays were led by their All-American and coach’s son, Doug McDermott, who poured in 27 points on 7-of-15 shooting and a perfect 11-of-11 from the charity stripe, while also pulling down eleven rebounds.  It was Creighton’s ability as a team to consistently get to the free-throw line and then convert (making a jaw-dropping 22-of-25 from the line), as well as to knock down shots from behind the arc (hitting 7-of-15) that ultimately held off a gritty Bearcats squad.

Gregory Echenique scored fifteen points, and Ethan Wragge came of the bench to drill 4-of-5 three-pointers for the Bluejays.

The Bearcats had four players score in double-figures, including leader Sean Kilpatrick, who finished with nineteen points.

The Bluejays will next square-off against second-seeded Duke in a Third Round match up Sunday night.

Scott Graham and John Thompson called the action on Westwood One Sports.

(Mcdermott gets the bucket and the foul)

(Kilpatrick’s jumper pulls Cincinnati even at 54-54)