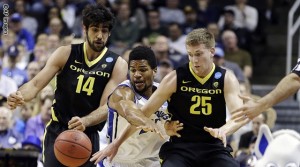 SAN JOSE, CA – Perhaps the insult of a 12-seed from the Tournament Committee will turn out to be the best thing that could have happened to the Oregon Ducks.

Continuing to prove the naysayers wrong, the Ducks pounded 4th-seed St. Louis by a convincing 74-57 final, earning a trip to the Sweet Sixteen. Damyean Dotson turned in another outstanding effort for the Ducks, with a game-high 23 points. Arsalan Kazemi hauled down 16 rebounds…or just seven fewer than the entire Billikens team.

St. Louis was paced by Kwamain Mitchell, who scored 18 points. But offense was generally hard to come by for the Billikens, who shot just under 38% from the field, including 3-for-21 from beyond the arc.

Ted Robinson and Bill Frieder called the action on Westwood One Sports.

(Singler hits a three to give Oregon early four-point lead)

(Kazemi and Dotson hook up for a pair, lead grows to 11)

(Loyd with a huge three just before the first-half buzzer)

(Dotson continues his huge game with his fifth trey)

(Ducks on their way to blowout win, and trip to Sweet Sixteen)