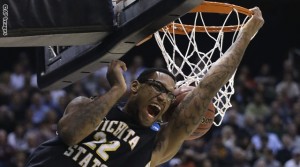 SALT LAKE CITY, UT – Though projected by many to be the first #1-seed to fall in this year’s NCAA Tournament, it was nonetheless a “Shocker” to see Gonzaga fall before the Sweet Sixteen.

Wichita State became the latest team to bust many brackets across the country, with a 76-70 victory over top-seeded Gonzaga in the West Regional. Ron Baker and Cleanthony Early each scored a team-high 16 points, with Fred Vanvleet adding 13.  All three players came off the bench to pace the Shockers’ attack.

Kelly Olynyk led Gonzaga with a game-high 26 points, and added nine rebounds. Mike Hart grabbed a game-high 14 rebounds, but the Bulldogs have been sent packing despite completely dominating the offensive glass, with 20 rebounds.  But Gonzaga shot only 35.6% from the field, compared to an even 50.0% for the victors from Wichita State, who advance to the Sweet Sixteen for the first time since 2006.

Dave Sims and Kevin Grevey called the action on Westwood One Sports.

(Olynyk pulls Bulldogs within one as Gonzaga comes back)

(Pangos connects from beyond the arc, as Zags’ lead up to seven)

(Shockers come back, as Baker closes the gap to just one)

(Vanvleet with a backbreaking three to give Shockers five-point lead)

(Shockers complete the upset, and are off to the Sweet Sixteen!)