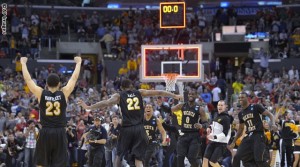 LOS ANGELES, CA – Their nickname has offered an apt description of their NCAA Tournament run, but perhaps it’s time to pay Wichita State their highest compliment yet. They’re going to the Final Four, and it’s nothing to be shocked about.

After building a 20-point lead in the second half, Wichita State survived a furious rally by Ohio State to emerge with a 70-66 victory, becoming champions of the West Regional. The Shockers become the first Missouri Valley Conference team to reach the Final Four since 1979, when Larry Bird led Indiana State to the National Championship game. That was the also the last time before Saturday when a 9th-seeded team reached the Final Four, when Penn turned the trick out of the Ivy League. It will be Wichita State’s second trip to the Final Four, the last one occurring in 1965.

The Shockers’ winning effort was not without its obstacles. Carl Hall was shaken up after a hard collision in the second half, and after briefly remaining in the game, exited to the locker room. Later in the half, Cleanthony Early badly twisted his ankle, but was able to shake it off and remained in the game after a brief departure. Hall and Early contributed 20 combined points, with Malcolm Armstead’s 14 points and seven rebounds pacing the Shockers’ effort. Fred VanVleet added a dozen points off the bench.

Ohio State fell one victory short of reaching consecutive Final Fours, as a 20-point deficit they dug for themselves proved too much to overcome. Trailing 56-36, the Buckeyes put together a 23-6 run to cut the deficit to just three with 2:49 remaining. But Tekele Cotton drilled a huge three on the Shockers’ next possession, and Ohio State would never come closer. Deshaun Thomas led the Buckeyes with 23 points and six rebounds, with LaQuinton Ross adding 19 points off the bench. The Buckeyes were ultimately undone by 19-for-61 shooting from the field (31.1%).

Wayne Larrivee and Bill Frieder called the action on Westwood One Sports.

(Tekele Cotton nails a clutch three to pump lead back to seven, but Ohio State not quitting)

(VanVleet with a big layup inside for 67-61 lead, as Buckeyes misfire at the other end)

(For the first time in 48 years, Wichita State is going to the Final Four!)