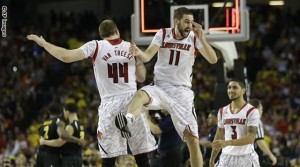 ATLANTA, GA – Trailing by a dozen points in the second half, the top-overall seed in this year’s NCAA Tournament field never panicked. Instead, Louisville methodically took their play to another level, and had just enough firepower to outlast a Wichita State team which proved once and for all that they belong amongst the elite in the nation.

The Cardinals are one win away from the third National Championship in school history – and first since 1986 – after a hard-fought, 72-68 victory over Wichita State. After the Shockers built a 47-35 lead, Louisville’s season may have been rescued by a little-known walk-on. Junior guard Tim Henderson, who scored a grand total of 16 points all season, hit back-to-back three-pointers to cut the Wichita State lead to just six points, at 47-41, and seize momentum for the Cardinals. From there, Louisville was able to implement its full-court pressure defense in the latter stages of the second half on a more consistent basis, and were finally able to wipe out the entire deficit when Luke Hancock hit a three-pointer with 6:31 remaining to give the Cardinals a 56-55 lead.

But the Shockers refused to back down, and trailed 71-68 when Hancock missed a free throw with six seconds left to give the Shockers one last chance to tie the game and force overtime. But after Ron Baker came down with the rebound, he was tied up by Hancock and a jump-ball was called, giving the ball back to the Cardinals. Replays showed that Louisville may have benefitted from a quick whistle on the tie-up call, and also showed that Hancock may have even fouled Baker. But the Cardinals caught the huge break, and after Russ Smith made his first free throw following a Wichita State foul, it essentially secured a Louisville victory.

Wichita State could not have asked for a better start, as the Shockers jumped out to an 8-0 lead with the Louisville offense in total disarray in the early going. But even though the Cardinals inevitably found their flow, the Shockers still owned a 26-25 halftime lead, and were 20 minutes away from becoming the first Missouri Valley Conference team to advance to the National Championship game in 34 years, after Larry Bird led Indiana State in 1979. But the Cardinals responded like the champions many project them to be come Monday night, as they demonstrated the mettle and toughness to fight back from a double-digit deficit, similar to what they accomplished against Syracuse in the Big East Tournament finals. The Cardinals will now battle Michigan on Monday night, with college basketball’s biggest prize hanging in the balance.

With injured guard Kevin Ware cheering them on from the bench in his #5 jersey, the Cardinals were led by Russ Smith’s 21 points, though he shot only 6-for-17 from the field.  It was Hancock, though, who shined brightest for Rick Pitino’s troops, coming through with 20 points off the bench, shooting 3-for-5 from beyond the arc. Their production was enough to overcome a rare, off-game from Peyton Siva, who scored only seven points on 1-for-9 shooting.  Cleanthony Early led Wichita State with a game-high 24 points, with Carl Hall and Ron Baker adding 13 and 11 points, respectively. Though the Shockers turned the ball over only 10 times against Louisville’s relentless defense, their bench was outscored by Louisville 34-9, which ultimately led to the Shockers’ undoing.

Louisville improved to 3-7 all-time in the National Semifinals. Their previous two victories ultimately led to the school’s two National Championships, in 1980 and 1986. The Cardinals are hoping that trend continues on Monday night.

(Hancock hits from deep again and Louisville goes up 65-60)