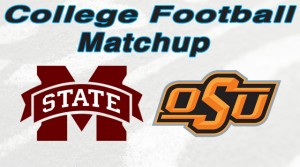 To get you ready for the game, our analyst Chris Doering, who will call the game on Saturday, filed this scouting report on the Bulldogs and the Cowboys.

In a Nutshell: The Bulldogs are primed to make a huge step forward offensively with fifth-year senior QB Tyler Russell back at the helm along with 2012 1,000-yard rusher LaDarius Perkins and an offensive line that has combined for 94 previous starts. Look for head coach Dan Mullen to shift this year’s offensive style to incorporate a more traditional pro-style, under-center type of attack to fit the strengths of this roster.

On the other side of the ball, Geoff Collins begins his first full season as the defensive play caller for MSU and expects his squad to pick up where they left off after his first game as the lone defensive coordinator in the Gator Bowl produced the defense’s performance of the year. The Bulldogs will use between 22-25 guys in an effort to stay fresh this year, something they have not had the luxury of doing in past seasons.

This is a big game for Mississippi State as many college football pundits have pointed out the lack of success that the Bulldogs have had under Mullen against anyone that is not a cellar dweller in the SEC West. A win over the team that the media selected to be the preseason champion of the Big 12 would be a tone setter for this team and would go a long way in proving they can beat a quality opponent.

Player I’ll Be Watching: Defensive end Denico Autry was a JUCO transfer last year and it took him the first half of the season to figure out the Mississippi State defensive scheme as well as the speed and strength of the SEC game. Once he did, though, he was a beast, saving his best performances of the year for the biggest stages versus Alabama, LSU and Texas A&M. Look for Autry to be in the Cowboy backfield a lot on Saturday.

What the Bulldogs Need to Do to Win: For the Bulldogs to win this football game they are going to have to “take the air out of the ball,” as coaches sometimes like to say. They’ve got to slow down the pace of the game. Look for the MSU offense to go deep in the play clock before snapping the ball and then to try to overpower the Cowboy defense at the point of attack and run the football in an effort to keep the clock moving.

In a Nutshell: If there is such a thing as having too much talent, then first-year coordinator Mike Yurcich has that problem on the offensive side of the ball. Oklahoma State returns two quarterbacks that started multiple games last year and were both highly productive along with five wide receivers with at least six career starts each, a running back with 25 TDs and an offensive line with three of last year’s starting five back. This offense has set season yardage records in each of the last three years. Expect this year’s offense to do the same. The only problem may be trying to keep all of their skill players happy.

The Cowboy defense also has a new coordinator as Glenn Spencer has been elevated from co-coordinator last year. Look for this year’s defense to be much more aggressive as Oklahoma State gave up far too many third-and-long conversions last year. I expect the Cowboy secondary to disguise coverages more and the corners to not allow the cushion they allowed last year.

Player I’ll Be Watching: J.W. Walsh will not start the game at quarterback for the Cowboys, but he should see the field early with a package fit to his athletic skill set. Walsh threw for over 300 yards three times last year, was OSU’s short yardage quarterback and brings the threat of the run in the open field offense. His 4.4 speed brings another dimension to the offense, and with a solid performance this week, I expect him to be the full-time starter before too long. The sophomore is clearly the future for Oklahoma State.

What the Cowboys Need to Do to Win: Oklahoma State needs to play their game. Nothing frustrates an explosive, up-tempo offense more than having to be on the sidelines for long periods of time. As I said, Mississippi State is going to slow the game down and I expect them to be able to extend drives against this defense. That said, the Cowboys have too much firepower for a defense that lost three members of its secondary from last year’s team – including two to the NFL. If Oklahoma State can prevent themselves from pressing too much I expect them to be able to put up big numbers offensively in this one.

John Tautges and Chris Doering will be on the call Saturday in Houston. Coverage begins at 3 PM Eastern and you can listen to the broadcast right here on the web site.