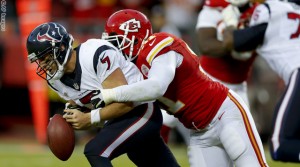 KANSAS CITY, MO – It wasn’t the dominating display seen in previous weeks, but the Kansas City Chiefs won’t mind as they improved to 7-0 on the season with a 17-16 win over the Houston Texans on Sunday.

Jamal Charles and Alex Smith had touchdown runs for the Chiefs, whose defense sealed the win with a late sack and recovery of a Case Keenum fumble.

The loss dropped the defending AFC South division champions to 2-5 on the season. The Texans also were bit by the injury bug again, with both running back Arian Foster and linebacker Brian Cushing leaving the game.