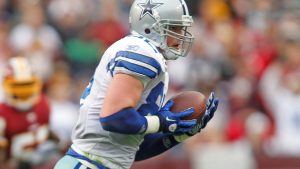 The next stop for the up-and-down Dallas Cowboys is the Big Easy for a Sunday Night Football showdown with the New Orleans Saints.

At 5-4, the Cowboys are a game better than the Philadelphia Eagles in the NFC East, but you wouldn’t necessarily know that Dallas was a first-place team based on the way pundits have been talking about them.

Part of that is self-inflicted, with an absolutely shocking meltdown against Detroit two weeks ago still fresh in the memory. The Cowboys come into tonight’s game off the back of a last-minute win over Minnesota.

Ahead of the game, our Scott Graham had a chance to talk to Dallas veteran Jason Witten.

Kevin Kugler and James Lofton will be in New Orleans for Saints-Cowboys. Coverage begins at 7:30 PM Eastern.