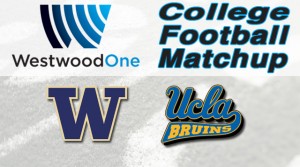 To get you ready for the game, our analyst Terry Donahue, who will call the game, filed this preview:

When I look at Washington, Keith Price is having a very strong year after a disappointing campaign a year ago. He’s come back really well and led this Huskies team. Bishop Sankey is one of the premier rushers in the league, and when he is on, he adds a dimension to Washington that takes a lot of the pressure off Keith Price and makes it so Price doesn’t have to do everything for the offense. I think that’s going to be vital in this game. They’ve got to be two-dimensional and not let UCLA’s very good front seven dominate the line of scrimmage. UCLA will try to shut down the running game and force Price to beat them by throwing the football.

UCLA’s defense is solid and I think their linebacking corps might be the best in the country. Quite simply, the whole game might come down to how two-way star Myles Jack plays in the game. If he’s able to impact the game offensively like he did a week ago against Arizona, UCLA will win handily. I think Washington has to have a defensive answer for Jack and they have to put together a defensive plan for the substitutions UCLA will make when they put in four or five defensive players to play offense. That proved to be very successful for the Bruins a week ago and Washington better have an answer for that.

What will determine the winner:

This game will highlight two of the best quarterbacks in the Pac-12 Conference in UCLA’s Brett Hundley and Keith Price of Washington. These are two of the best three or four guys at the position in the league and I believe whichever quarterback plays the best and can get a running game going to help take some pressure off themselves will be the winner. I think UCLA is probably the better team coming into the game, but I see a clear path to victory for Washington if they can stay two-dimensional on offense. Home-field advantage will also play a role, I think. UCLA is 9-2 at the Rose Bowl under Jim Mora and Washington has historically struggled away from Seattle. It should be a great game.

John Tautges and Terry Donahue will have all the action as Washington visits the Rose Bowl to take on UCLA. Coverage begins at 8:30 PM Eastern and you can listen to the broadcast right here on WestwoodOneSports.com