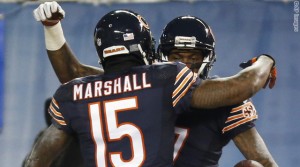 CHICAGO – The Chicago Bears scored on their first eight possessions en route to a 45-28 Monday Night Football victory over the Dallas Cowboys.

Josh McCown was the star, throwing for four touchdowns and adding a fifth on the ground as Chicago improved to 7-6 on the season and into a tie with Detroit for the top spot in the NFC North, though the Lions hold the tiebreaker by virtue of sweeping the Bears in the regular season.

Dallas fell to 7-6 and is a game behind Philadelphia for the lead in the NFC East.

(Tony Romo finds Jason Witten, who fights his way to the end zone)

(Matt Forte takes a short pass into the end zone)